On May 21, what would have been John Chase’s 58th birthday, about 200 friends, co-workers, and design fans joined us for John Chase’s West Hollywood, an adventure on foot through West Hollywood to honor the city’s late, great urban designer. We met at the West Hollywood Gateway at La Brea and Santa Monica at 10:00 am and marched throughout West Hollywood until 5:00 pm, stopping at over a dozen locations: buildings and streets John had written about, places where he lived and worked, and gorgeous examples of architecture that John’s work for the city had helped make a reality. (And yes, we only venture west of La Brea for certain events—John was definitely worth it!) At each location, architects met us to talk about the projects and how John helped bring them to fruition. Here at the bright red and orange condo project Formosa 1140, developer Richard Loring told one of the most memorable stories: When the project’s proposal came under discussion at the city council meeting, John showed up to the hearing in a red seersucker suit. It was a clever and sly way to show he was fully in support of the project, without saying a word. Throughout the day, friends and co-workers of John read excerpts from essays that he had written about the city. Frances Anderton read a passage from John’s book Exterior Decoration, which talked about how the design and decorating community in West Hollywood used clever, affordable touches to distinguish their simple stucco and Spanish-style homes when they didn’t have the money to execute a full renovation. We made one stop by John’s own house, a tiny bungalow that he lived in before moving to a house with his husband, Jonathan Cowan. Katherine Spitz, his friend and former classmate at college, talked about how they worked together to create a garden for entertaining that felt like an extension of the home. The brightly-colored plexiglass panels they added to the garden were still there, although a bigger hedge blocked much of the view that John had worked so hard to keep open to the street. Public spaces were very important to John and he was responsible for helping to create one of the most vibrant and best-used spaces in West Hollywood, Plummer Park. For the community center he worked with Brian Lane, who headed up the project at Koning Eizenberg. Brian talked about the plan for the center and played a video of John where he talked about the project, calling it “West Hollywood’s living room.” Just hearing his voice in the space was incredible. West Hollywood’s excellent initiatives to create affordable housing for groups ranging from seniors to people living with HIV was championed by John. Here, Ric Abramson talks about the Sierra Bonita Affordable Housing project designed by Patrick Tighe, a stunning example of how affordable housing can be architecturally outstanding, sustainable, and good for the neighborhood. John wrote a lot about the vernacular architecture of West Hollywood, including the ever-present dingbat apartments which are found on every street. While facing an aqua dingbat that actually appeared in one of his books, Christopher Hawthorne read a passage called “Stucco Box” from John’s book Glitter Stucco and Dumpster Diving that explained the cultural impact of these little pastel cubes. 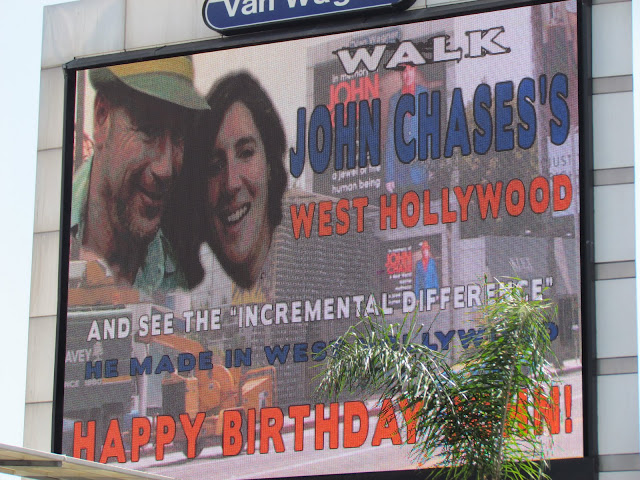 On Sunset Boulevard we got a huge surprise. Joe Shooshani, the owner of a building on Sunset with a video wall had previously shown a photo of John on the signboard in the weeks after his death. Joe not only put that photo back into rotation (the top image on this post), he also added a second slide commemorating the walk and John’s birthday. Everyone gathered outside the Andaz hotel and snapped shots of John on the big screen again. Afterwards Merry Norris talked a bit about the Andaz’s renovation, and how John was a part of turning the “Riot Hyatt” into a classy, design-focused hotel. Merry also explained the art program that she helped curate there, including the public art that graces the exterior. And then, she took us inside for free iced tea, soda and water courtesy of the Andaz at one of their communal tables. Thanks so much to the Andaz! Definitely one of the most emotional moments on the tour came when Jennifer Davis, who worked at the planning department of West Hollywood with John, told the story behind their quest to save Mel’s Drive-In, which was then known as Ben Frank’s. Their persistent, witty urging—basically giving a crash course in design education by bringing in books and photos—helped preserve this Googie structure by convincing the owner of its significance. Mel’s was extremely generous to let a group of sweaty urban hikers inside to see the plaque itself. It reads: The Googie Style Architecture of this building has been preserved by the City of West Hollywood City Planners Jennifer Davis & John Chase” Not all the architects talked exclusively about the buildings. Julie Eizenberg, who designed the Hancock Lofts project that she’s standing in front of, also told stories about attending college with John, where he was always up for a drink and a late night conversation. John was also responsible for many improvements to West Hollywood’s streetscape. Here, landscape architect Pat Smith and John Keho, from WeHo, talk about the various infrastructure decisions and landscaping choices that make the city’s streets more amenable to pedestrians. We also stopped at a very special space outside Koo Koo Roo to hear the essay that John had written about it as a victory in creating a kind of informal public plaza for the city. A very special moment for the tour occurred at Habitat 825, the fantastic condo project of architect Lorcan O’Herlihy and developer Richard Loring. Due to its location next door to the Schindler House, the project was extremely controversial. At one point, Lorcan and Richard (from left) were at odds with Bruce Kaye (right), who was working on behalf of a preservation group for Kings Road. But, as they remembered, John encouraged them to work together and served as a uniting voice for the project. Bruce also read an incredible remembrance of John. Due to John’s penchant for wearing bright colors and outrageous patterns, everyone was encouraged to dress as if John had picked out their outfits. We swear, even the jacarandas seemed a bit brighter that day! Deborah Murphy definitely won for best dressed, with a photo of John attached to her bag and matching pooch-wear! At the end of the day we gathered at West Hollywood institution Barney’s Beanery, where we toasted John’s birthday over pub grub and beers.

There were so many incredible moments throughout the day that it’s hard to sum them up in a post. So thanks to the LA Forum, we will be helping to produce a map and poster of the day’s stops, along with details from the tour, to help keep John’s legacy alive in the city he loved. Look for that later this year, as well as information on how you can get one. Until then, you can see the Google Map of all the locations to help guide your own tour.